I went to the highway like I used to go to the library in the pre-Internet days. I would walk the couple of miles reviewing my headful of questions, and go over my notebook so by the time I got there, I would be ready to research answers for the weeks’ questions.

When I got there I looked South and looked North. Â When I looked North, right near what used to be a cafe where years ago I registered nshrine.com in a fit of vacation inspiration. Â I saw a white lump in the grass. “That’d be it.”

As I got closer I got disappointed. Â It looked to be directory, maybe even a phonebook. Â Those can be inspirational, but nothing that could really get me going, nothing right for something like this. Â I decided to go with the bibliomancy method. Â I would think of the question in very precise terms, pick a random section, and pretend the contents were some confused person’s answer.

The paragraph I chose was a definition of “conflate”. Â Now the challenge is to wedge this into the problem space. Shouldn’t be too hard. 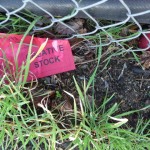 My allergies tell me it’s officially Spring, even if the calendar doesn’t. I’ve got some great creative professional opportunities coming up, stalling, turning around, running away, then coming back. I’m trying to keep patient, but not too much so.

I saw this when I was wondering if I had chosen the right profession, and if it could keep me properly challenged. It reminded me that inviting creativity isn’t the role of my profession. I’m responsible to remain creative. I remembered working in factories and having my head full of ideas all day and writing all night.

My professional choices don’t give me creative opportunities; Every moment does, if I’m creative enough. 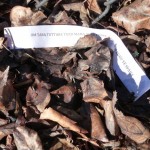 I’ve been on a strong atheistic kick lately. I’ve really lost most of my patience for my impulsive defensiveness about this too. I’m here now and pretty happy.

I got caught on a funny loop on a walk the other day. Being wholly atheistic makes me love people more. People are mostly theistic. I become more tolerant of religions thereby. But wait, if I care about people I should care that they believe in the truth. That last step is escaping me no matter how many frothy, militant atheists I listen to, but it is a conclusion I take, but not to heart.

Confused, I look down and saw this. It’s hardly dropped from heaven, or satori, or whatever, as there’s a temple across the street that has been the source of fantastic litter in the past. Nonetheless, my own absurd religion caused me to contemplate its possible meaning for an hour or so.

My recent experience of listening to audio books has made me more focused on the location of thought. When recalling the material I heard, I was more apt to recall its place in the work by remembering where I was in my walk when I heard it.

I remember the exact locations where I was when I had thoughts important to me decades ago. I’m sure we all do. I remember hearing that Homeric storytellers would hold a path, or a mansion, in their minds as they told the Iliad. Each door and corner unfolded the verses and held the plot. Our thoughts lay a map upon the ground we’ve traveled and our past best follows a familiar path.

Lately I’ve been bringing everything back to some lost commentator’s thoughts on hunting and tracking. We became storytellers and scientists in order to make sense of the evidence on the ground. We ate by how well we could create a good story, tell it to those who could help, and follow it through to the prey. We speak hungry steps.

The years in this town has created a topography of memory for me. That corner holds a stack of dream interpretations. That alley is where I find confidence. I’m humble near the tracks and happy near that vacant lot. There’s a block downtown that is more sacred to me than any church.

I’ve been doing a lot of looking into geolocation and augmented reality lately, not as a technology I’ll bring into my career, nor as a scientific curiosity, but as a mode of expression my mind has always had, and poetry we’ve always sung. Could be fun. 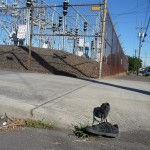 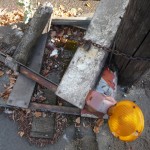 I saw this while walking through some worries. I have to choose between some good choices. Instead of comparing the various virtues and qualities of the choices, I was compulsively weighing risks, using long passed and irrelevant injuries as measure. Everything was incommensurable and awkward. I started feeling more and more inconfident, almost certain that I would choose the wrong path. I became lost. I saw this.

The reflex to cling to fear and apprehension outlasts not just the injuries, but the fear as well. I gave the barrier a nudge with my foot and kept walking. 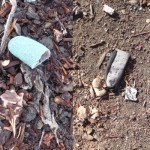 After photographing thousands of gloves over several years, I can’t recall ever seeing a removed glove finger all alone. Yesterday I saw the one on the left one block away from my house. The one on the right I saw yoday about twenty five blocks away.

Please make up a meaning. 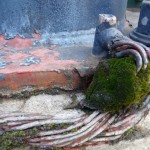 Normally I look for signs to provoke new thought and to think differently. The most striking things I see now are those that stop thought. A light pole on a freeway bridge next to a bus stop has a twisted, half-painted ground wire. It’s home enough for a cluster of moss. It’s home enough to say ‘shhhhh’. 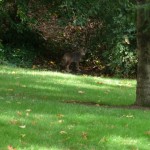 I was wandering around, waiting for the phone to ring when I found a great place to talk. As soon as I saw the bench, I saw the coyote. It walked by the bench and then into cover and turned to look at me. I was able to get the camera out before it left.

The space others leave behind by others can welcome us in ways solitude can’t. Knowing that the coyote had been there seconds before made the phone ring clearer and my greeting stronger. 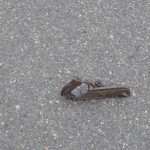 I’m normally pretty good at making up some sort of symbolic meaning for the junk I find. I’m coming up with nothing solid for this.

It’s a Stanley planer, made in England. I’d guess it’s about 50 years old. Though the blade seems relatively new and sharp the rest is rusty. It appears that the front handle fell off a long time ago.

I’ll take any suggestion. All I’m imagining is “making things flat” and that is uninspiring.