For a long while I was posting gutter study, the meaningful trash I find, to Instagram, but my hate for the interface was the last straw on a very weak back.

So I thought I’d use this old space.

I was thinking how to get that back in my life. I installed the WordPress app on my phone, hooked it up to my old blog, pulled out a recent photo, and did a test post. I was thinking about how I might integrate it into Instagram and Twitter and whatever while I was walking. Time was when I fed my family on building social media integrations so I bet I could something useful.

I saw this on the sidewalk and I don’t expect anyone to believe me. One of the foundations of my gutter study is photography of cast-off gloves. I’ll do a post about that sometime.

Anyway expect more. I’ll find a way so you don’t have to follow this blog directly.

This was a glove, as far as I could tell from a casual glance at five paces. It snapped into its reality at about two. When I read the backwards “Get In Touch’ and realized the fingers were tear-offs I started to feel like I was in a bad script.

Anyway, I will just likely post a picture and a title, and maybe a thought, but mostly not the latter. I think. And I hope to find a way so nobody has to follow this blog. It’ll be the propagation node to phenomenally mundane photos of garbage.

I went to the highway like I used to go to the library in the pre-Internet days. I would walk the couple of miles reviewing my headful of questions, and go over my notebook so by the time I got there, I would be ready to research answers for the weeks’ questions.

When I got there I looked South and looked North. Â When I looked North, right near what used to be a cafe where years ago I registered nshrine.com in a fit of vacation inspiration. Â I saw a white lump in the grass. “That’d be it.”

As I got closer I got disappointed. Â It looked to be directory, maybe even a phonebook. Â Those can be inspirational, but nothing that could really get me going, nothing right for something like this. Â I decided to go with the bibliomancy method. Â I would think of the question in very precise terms, pick a random section, and pretend the contents were some confused person’s answer.

The paragraph I chose was a definition of “conflate”. Â Now the challenge is to wedge this into the problem space. Shouldn’t be too hard. 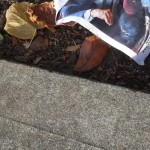 I was listening to the audio book The Greatest Show on Earth on my walk. Dawkins mentions the somewhat familiar fact that Darwin had a copy of Mendel’s theories in his library, but it’s pages remained uncut. If Darwin had read those pages, Dawkins speculates, the history of biology would have changed greatly.

The opposite theme is so much more common. What if some artist hadn’t met another in a cafe? What if he had been on that plane that crashed? What if I hadn’t gone that way on my walk? It’s almost refreshing to know that Darwin was a knife stroke and an idle afternoon away from great progress. The world missed a profound innovation that day he troubled over a letter to a cousin and napped.

I hear these things and see a torn up ad under a bush. I don’t have free time, but I’m in a period of far less structure and pressure, and a whole world of opportunity. I will miss the greatest opportunities, and the least. I just hope that I cut that damned page.

I woke up in the middle of the night with this story in my head. This makes me think that my mind is just echoing something, like something I read in SPY magazine, or saw on Saturday Night Live at any rate, it’s stuck in my head, like a tv jingle or a march. Here it is:

Coyote finally realizes he’ll never catch Bird. He stops running entirely and subsists on boiled cactus and flies. Life feels simple, pleasing and he starts noticing the beauty and charm of everyday things he used to run by. This last about three days.

The Road Runner still runs past him every once in a while, slower, closer. He’s not taunting any more. It seems like he’s concerned, like the bird is afraid that Coyote is broken. Coyote felt broken one day.

He jumps off of cliffs. He drops boulders on himself. He even puts his head in a cannon. This time, though, he survives with an even greater sense of urgency and defeat. He pursues an ending more than Bird. He stops sleeping to plan the next days attempt.

Coyote pauses for a moment, only a frame, before lunging. Bird’s neck snaps easily and suddenly. His legs are stringy from a life of running. Though his eyes were too salty, his heart is hot and tender.

The feast lasts all day and Coyote naps several times during it. He is comically bloated with a grin bigger than his face. At last he knows what victory feels like and tasted like. He feels fuller and fuller. The vomiting starts at sundown.

By the next sundown he knows he won’t make it to the cave, nor to the morning. A second, now unwelcomed, victory comes for him. The Bird was poison to him. He keeps thinking of the last beep he heard from it. It was as close to the word ‘No’ he ever heard from the Bird, but not a ‘no’ of fear, or defeat, but of concern.

Bird had known he was poison to Coyote and spent his life protecting Coyote from this death. He has wasted, and then destroyed, his life chasing the only thing that could kill him, and the only thing that ever cared for him. Coyote also realizes that he can’t lift his head from the road.

The rest were headlights and then a surrounding darkness, a familiar song and a final brilliant logo.